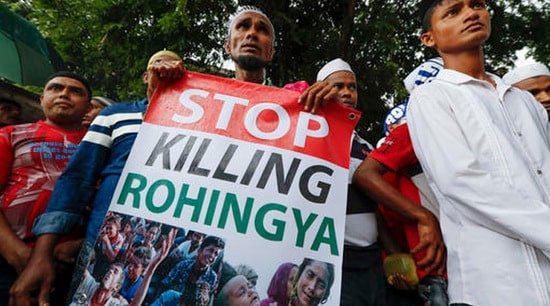 Another addition to the UN failures in comlying to its Charter is Rohingya Plight.Rohingya,pronounced as Ro-hin-ja,are stateless Indo-Aryan People from the Rakhine state of Myanmar,majority of them are Muslims.

Rohingya are not included in the 8 races acknowledged by Burmese government as their citizens.Country’s law does not subject them to citizenship and are persecuted by Buddhist majority.Almost the whole populace of Rohingya lives in country’s western coastal areas and are required to seek permission before leaving the state.Rakhine is country’s poorest state,with its citizens being the poorest and persecuted one.                       Over the past two months,more than 600,000 citizens have escaped torture,rape and mass murder and migrated towards Bangladesh.Bangladesh,a dense populated country,is not giving the refugees a warm welcome.Rohingya are being settled out of the coastal cities in camps where army reigns in.Mobile cellular companies have been ordered to not to provide connections to Rohingya.In September,Bangladesh’s Prime Minister Hasina Wajid visited refugee camps,embraced refugees and claimed that if Bangladesh could serve 170 million Bangladeshis,then it could also serve new arrivals.

Bangladesh feels itself isolated over this issue.Its neighbors are not there to help.China has very good relations with Burmese government and has sided with Burma.Indian government is successfully exploiting public fears of ‘Islamic militancy’ and is trying its best to keep Rohingya out of its border.

Though Pakistani media remained very vocal against Rohingya persecution,however it has brutally failed to convince Pakistani officials to do something substantial for Rohingya.Officially,55,000 Rohingya live in Pakistan.Most of them fled the repressive military regime of  Myanmar in 1962.Yet half a century after arriving in Pakistan,Rohingya are still in search of their identity.They have not been granted citizenship and live dismal life.Pakistan should take steps to provide legal rights to these Rohingya.Moreover,Pakistan should also take diplomatic steps to stop persecution of Rohingya living in Myanmar. Latest posts by asadlovesmaham (see all)