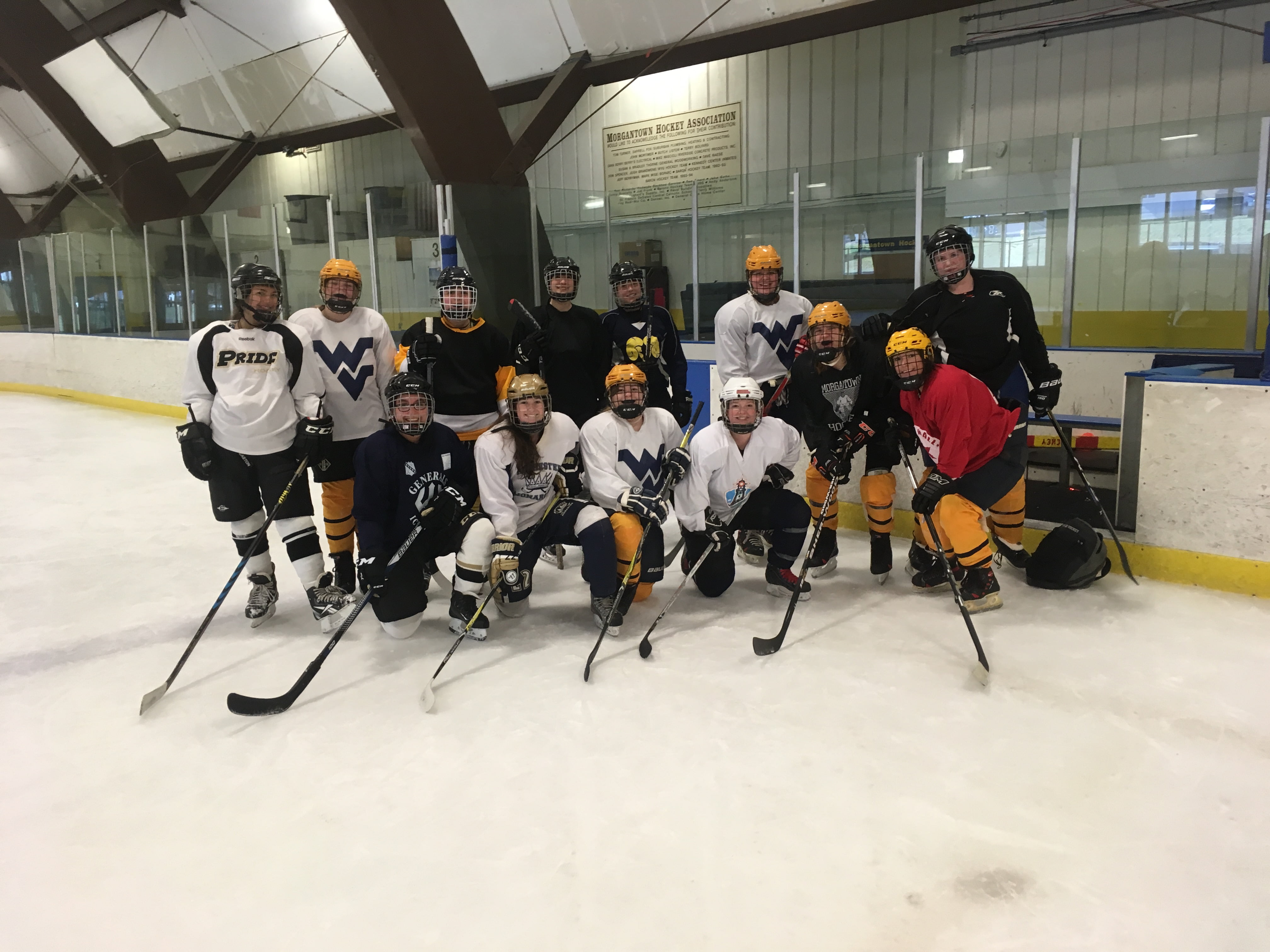 Cheyenne Luzynski, the future faculty advisor of the WVU Women’s Hockey club, is the human form of inspiration. From students to coworkers, Luzynski has had an impact on all. She is originally from Potterville, Michigan. “Athletics were kind of a very formative experience for me. I played all throughout junior high, high school, and had the privilege to play in college,” said Luzynski. After going to college at Central Michigan, Luzynski got the chance to coach volleyball at a nearby college called Alma. This experience then lead to her coaching basketball, track and field, and then eventually becoming the assistant athletic director for Alma. From the years of being athletically involved, Luzynski was the only woman in the entire athletic department in Alma. “We had 18 varsity sports, men’s and women’s, and I was the only female,” she said, “It reached a point, I was there for six years, that this wasn’t fair. Why aren’t there more women here? I need to explore this.” From this point on, Luzynski made women in sports her main focus. She studied the historical emergence of women and intercollegiate athletics for her doctoral thesis that took place at Eastern Michigan University.

In recent years, Luzynski took a job in Morgantown teaching in the Multidisciplinary Studies department at West Virginia University. Her official area of expertise is leadership studies, which exposes students to leadership history and theory as well as giving them practical experience through observed learning. “Leadership is my jam. I just really am fascinated by it and love it. I see it as a mission,” she said. Luzynski is now teaching in Sports Management, Sport History and Sport Philosophy classes within the MDS program. Evan Widders, who is an Associate Professor and Coordinator of the Programs for Interdisciplinary Studies program, has said Luzynski is, “An invaluable member of the faculty…Her innovative teaching methods, important research on athletic leadership, and love for mentoring students have made irreplaceable contributions to the success of our programs.”  Her influence in class isn’t just limited to faculty. She inspires many students, including Ashley Osborne. Osborne talks about Luzynski in great detail, “She’s amazing. I had her for a class this spring semester and she told me her background. That was when I kind of decided to start a hockey club. She has crazy sports background…does leadership…woman in sports…huge advocate. I was like, oh my god, you’re literally the perfect person for this.” Luzynski’s influence alone was what really sparked the thought process on West Virginia University’s first women’s hockey club.

Osborne, the official president of the club, did most of the groundwork with the creation of the club. Osborne and Luzynski were on the same page for the club’s main mission: to empower women.

“I think that the underlying thing here and the whole purpose of the club is to bring these girls together and have a good time” Osborne said. Women clubs in general have been much rarer than men’s clubs on campus and country wide. But, since the early 1990s, women clubs in colleges across the country have increased by almost 10 percent according to the NAPSA Journal.

The men’s hockey club has helped set the women’s club up, providing equipment, teaching techniques, and rink availability. Currently, both clubs practice and play at the Morgantown Ice Arena. Todd Gookin, President and General Manager of the Men’s Hockey Club, says, “We are helping them as we have a great framework of how to run a club team at WVU. Ashley and Cheyenne have done a great job spear heading the effort on research and contacting leagues at this point.”

Word of a women’s hockey club at WVU is spreading like wildfire. Luzynski said that with only five days of notice with little media coverage, the first meeting brought more than 12 plus women wanting to join. Osborne and Luzynski also got multiple texts and emails from other women who couldn’t make it but were interested. Some of those were from incoming freshmen that will be starting next fall. Luzynski was in awe.

“Even a freshman that’s two years back, who’s a current junior in high school, has reached out just because they started to see this” she said.

There are seven other colleges that WVU could be up against including: Virginia Tech, Pitt, and universities in Ohio. The club is going to play at the Division III level with 14 scheduled games starting the next fall season.

Cheyenne Luzynski is hopeful for the future of the club, “There’s a lot of excitement and significance in playing a sport but then especially playing a sport like hockey, where the rules are very balanced with the men. It’s a healthy outlet and I would encourage anybody who’s interested to follow us on social media” she said.